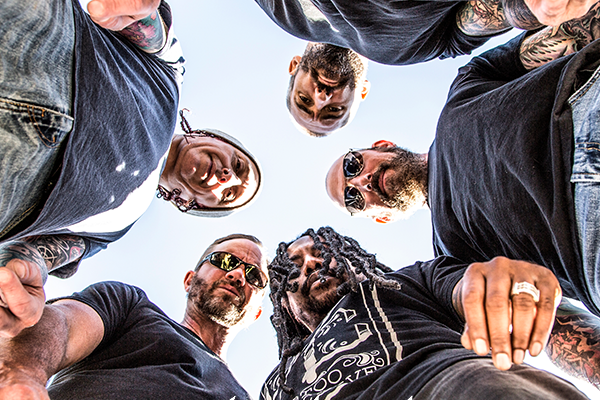 Music unifies us when we need unification the most. It gives people a reason to put differences aside and come together.
In 1994, Sevendust first forged a familial tie amongst each other that translated into one of the most diehard audiences in the game. To this day, the connection between fans and the GRAMMY® Award-nominated, gold-certified hard rock outfit only grows stronger. For their twelfth full-length and first release for Rise Records, All I See Is War, the quintet—Lajon Witherspoon [lead vocals], Clint Lowery [lead guitar, backing vocals], John Connolly [rhythm guitar, backing vocals], Vince Hornsby [bass], and Morgan Rose [Drums]

As Connolly puts it, they simply “made a Sevendust record.”

“We’re as polarized as we’ve ever been,” he continues. “Discussion is not happening. Everyone is so quick to snap online. We’re not listening. We’re just talking. In these songs, we don’t sugarcoat what’s going on. For as dark as the subject matter may be, it’s about hope. We know we can be in a better spot, because we’ve seen so many different individuals come together around music.”
“We take pride in the connection we have,” adds Lowery. “We’ve always been a people’s band. We’re typical guys who just happen to make a career on stage. With this relationship to the fans, we realize how much we need each other, so we push ourselves to deliver. We don’t stop. We keep moving.”
That’s exactly what these five musicians do every time they get in the studio or on stage. A trifecta of now-classic gold albums—Sevendust [1997], Home [1999], and Animosity [2001]— ignited their journey. Known as an equally intense and unforgettable live force, they’ve consistently packed houses around the world and decimated stages everywhere from Rock on the Range and Woodstock to OZZfest and Shiprocked! 2015’s Kill The Flaw represented a high watermark. Bowing at #13 on the Billboard Top 200, it scored their highest debut on the respective chart since 2010 and marked their fifth consecutive Top 10 on the Top Rock Albums Chart and third straight Top 3 on the Hard Rock Albums Chart. Most impressively, the lead single “Thank You” garnered a nomination in the category of “Best Metal Performance” at the 2016 GRAMMY® Awards, a career first.
At the top of 2017, the boys discussed what would become their next offering. Instead of diving right in, they took advantage of an eight-month writing process, which proved to be a breath of fresh air.
“Without a doubt, it might’ve been the longest writing process we’ve had for any project other than the first one,” affirms Connolly. “We didn’t need to hop in the studio and punch out a record in a month. We wanted to bring our A-game.”

After sessions in their native Atlanta and at Lowery’s spot in St. Louis, the group headed down to Orlando in order to record at Studio Barbarosa with Michael “Elvis” Baskette [Alter Bridge, Trivium, Slash]. Over the years, they maintained a friendship with the producer amplified by the praises of longtime comrades Alter Bridge and Connolly whose Projected utilized his mixing talents on their debut.
However, this would be Sevendust’s first time working with him.
“The energy was great,” smiles Witherspoon. “At one point, I did seven songs in four days. He really challenged me as a vocalist. We all just gelled. We’ve always talked about doing something for years and years. It was a long time coming. From the first moment we walked into his house, you could feel it. There hadn’t been another band who lived there before. We capitalized on the meeting of the minds. It was a brotherhood.”
“We haven’t had a producer since Cold Day Memory,” Clint goes on. “Elvis was so hands-on. He made us try new transitions and step up our game. Sonically, he opened up a lot of doors that I don’t think we would’ve gone through if he hadn’t been there. We preserved the essence of what we are, but we took chances. Lyrically, we captured what we’ve gone through, all of the rough times, and the changes.”
They introduce All See Is War with the opener and first single “Dirty.” Pummeling drums and driving distortion underscore a soulful proclamation from Witherspoon as he croons, “I’m no stranger to this thing called war.” The guitars crescendo into an expansive refrain that immediately imprints itself before a hummable solo.
“I freestyled that first line,” recalls Witherspoon. “It’s something I haven’t done since ‘Angel’s Son.’ I think it set the tone for the whole thing. It was pretty magic.”
“Someone wants to see you fail, and it really aggravates this person that you’re persevering and surviving anyway,” explains Lowery. “The lyric ‘I’m gonna die whole’ means not being extinguished, getting through, and pissing off your enemies.”
The neck-snapping guttural groove of “Andromeda” gives way to another unshakable chant.
“The subject matter is a bit different,” states Connolly. “Porcupine Tree’s Fear of a Blank Planet is arguably one of my favorite records. The idea is similar to ‘Andromeda.’ These pharmaceutical companies have made it so everyone is hooked on something. You don’t even know why you’re on these medications. All of last year’s horrific suicides were linked to a pill. Think about the opioid crisis. It asks, ‘Can we just stop?’”
Slyly nodding to Lowery’s love for Stranger Things, “Not Original” thrives on airy, cinematic guitars that unfurl into one of Witherspoon’s bluesiest and boldest performances.
“We wanted to get into some new territory,” elaborates Lowery. “It’s about being in a dry spell and not able to find creativity. You don’t want to repeat yourself. I thought I’d go for this new wave thing, because I was watching a lot of Stranger Things.”
Nailing the “old school vibe,” “Risen” drops a hard-hitting and hypnotic hook that’s primed to set festivals ablaze. “You’re down and out looking for hope,” explains Connolly. “You ask the question, ‘Are you going to kick me while I’m still down, or are you going to help me stand up and get through this?’”
In the end, that’s what the music of Sevendust does. It empowers listeners, lifts them up, and lets them know they’re part of the family.
“This band means family to me,” Witherspoon leaves off. “I wake up and can’t believe this is what I do for a living. I still feel like that 20-year-old kid who signed a record deal a zillion years ago. Sevendust is also home. Even though we’ve been doing this forever, it feels like the beginning.
“This what we are,” concludes Connolly. “It’s just another new version of Sevendust.” – Rick Florino, February 2018